The final push, leg 4 Napier to Auckland for the 3rd time!

The Napier to Auckland leg has been kind to Rob and I on the last two occasions, we won our division on PHRF for the leg in the 2011 RNI, and won overall on PHRF in the 2012 RNZ. We left the dock at Napier for the last time on equal points with the bigger and faster Marshall Law, hoping that our previous good luck would hold, even thou both of those races had been held in much different wind conditions.

We started at 11:30, clearing the blocks and sailing on the wind under #1, Marshall Law after a start line infringement stormed off to the left using an upwind code zero, a sail we could not match. We stayed high, checked and rechecked our weather forecasts, observations and optimal routing.

The weather models were 100% on the money and we carefully played move by move the game plan we had developed with the help of Expedition. Each sched we imported the locations of all the boats into Expedition allowing us a clear understanding (I mean numbers) of our performance. We scoured the observations and compared them to our onboard barometer, so carefully calibrated before we left. And we sailed 2 hours on 2 hours off, but really 2 hours on,  30 or 40 minutes off, wake, check where were are, have we got the right sails, what can I do to make us go faster...

On the evening of the first night, or maybe early morning of the 2nd day, it was time for our 2nd reef as the wind was increasing and we were firmly going to be on the wind for 150 plus nm. It was lumpy, and I unfortunately slipped, banging my face on to the companionway side. Rob took over my watch and I limped below to ice my face. Thankfully, ice and some painkillers eased the pain, but I ended up short changing Rob on two watches in the next few, meaning his valuable energy reserves were hit hard. 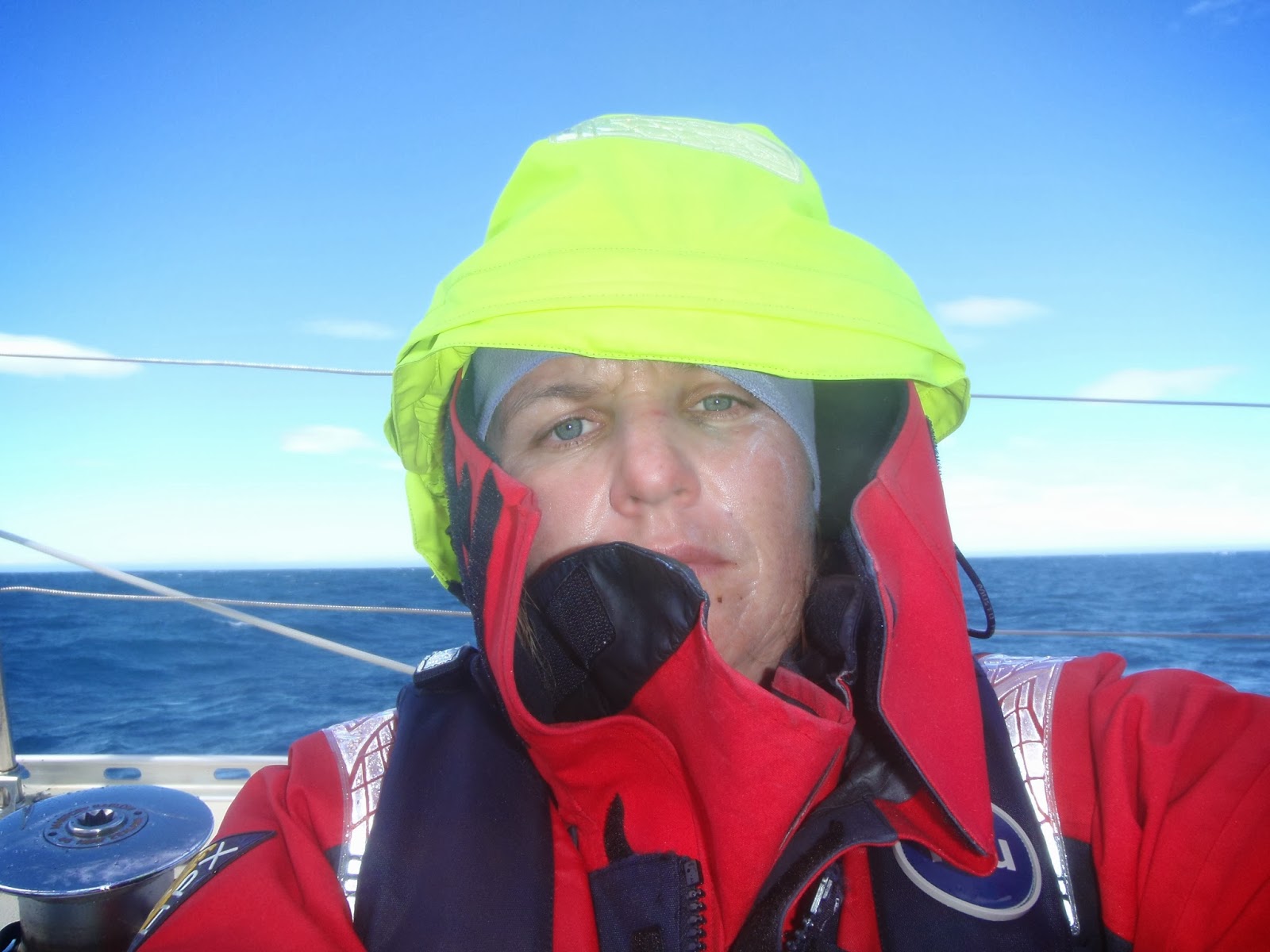 We struggled on for another day on the wind, knowing all along that the next step of making it round East Cape was make or break for us. As we approached the Cape, the well forecast, but early occluded front engulfed us, and we drove solely on instruments in drizzle, it was hard going and I thought back to our first race when we had no working electronics, I was so grateful for those 4 glowing red displays.

Once past East Cape, we tacked and knocked into the Bay, and tacked on to the line that would take us directly to Cape Colville! Pretty exciting to be sailing towards to finish at 7-9 knots. The last couple of days were pretty uneventful, reaching at speed towards Coromandel. We reefed again and then outside the Mercury Islands, decided that our main could not take too much more of a flogging and so once the wind reached 40 knots, we took it down. 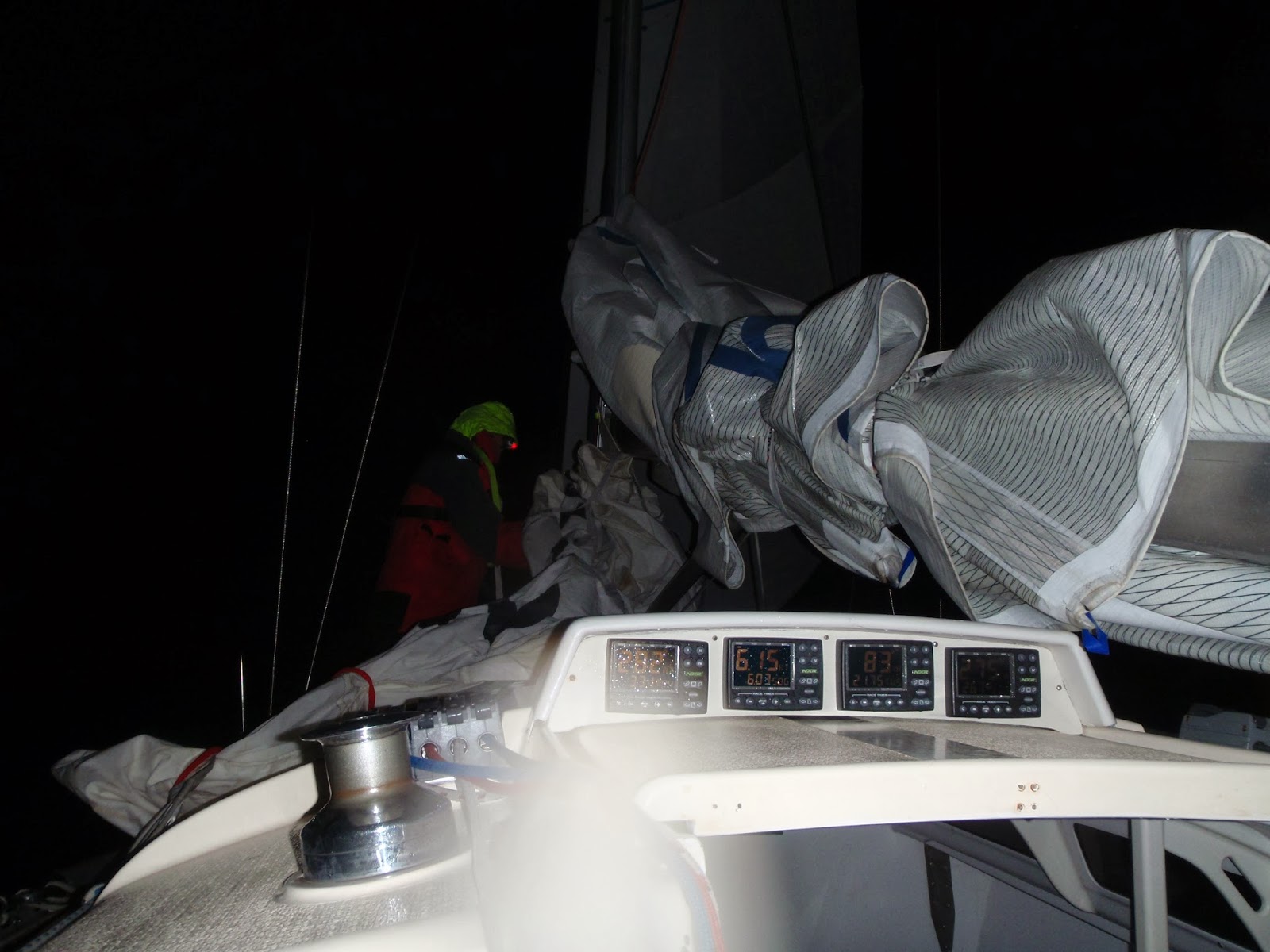 Main down, Rob prepares the trysail
A bit of a brave move, trying to win a yacht race sailing round with only half our sails, but it paid off, about the same time Marshall Law further out to sea and 25 nm behind us at that time broke their boom, ending our tussle. We re hoisted, sailed into Westhaven to finish at 10:13 am on Monday. Our result, 1st PHRF Divison 3. 2nd PHRF overall, 1st PHRF Div 3 for the race!

Hopefully in the next few days, Rob will have some words to add. But for those of you who want a pretty cheeky wrap up of racing in division 3 check out the Live Sail Die interview with Chris Skinner.